Our Vice President, Linda Langer, was quoted in Newsday regarding tattoos in the workplace!

To read this article on Newsday.com, please click here: https://nwsdy.li/2DQlMSi 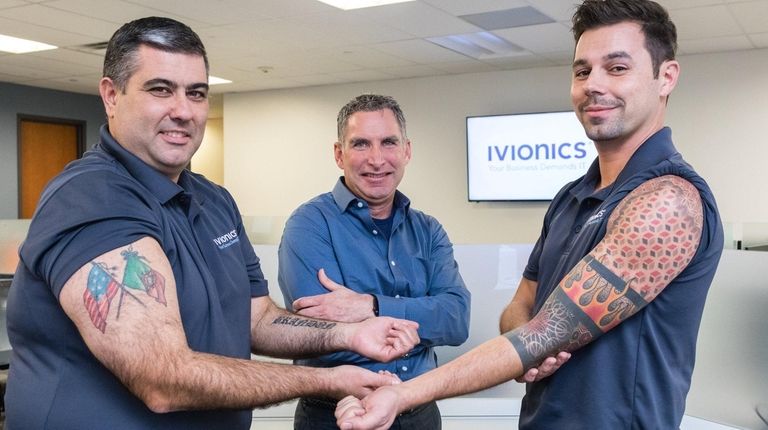 Tattoos are no longer taboo at Long Island workplaces.

Once considered a no-no in professional settings, tattoos are becoming more accepted in offices across the country because of several factors, including the rise of tech firms and their nontraditional approach to office culture and labor shortages. Another big influence is the dominance of millennials — a generation in which body art is widespread —  in the workforce. Last year, millennials made up the largest percentage of the labor force, 35 percent, with 56 million people, according to the Pew Research Center. The study counted millennials as those 21 to 36 years old.

All those factors are changing the corporate mind-set toward tattoos.

“Tattoos are in the larger category of things that are more accepted,” said Lily Cushenbery, an assistant professor of management and the director of the Leadership & Creativity Research Lab at Stony Brook University. “The tech boom and the rise of diverse organizations have made all these different things more acceptable. We are sort of losing that traditional 9-to-5, go-to-work-in-a-suit culture.”

A tight labor market, with the lowest unemployment rates in years here and nationwide and with resulting labor shortages, has prompted some employers to be more open-minded about tattoos. The Island’s unemployment rate was 3.1 percent in October, a 17-year low.

Nationally the number of job openings rose to 7 million in September, from 6.1 million a year earlier, the latest U.S. Bureau of Labor Statistic’s report shows. And local employers are expressing concern about not finding enough skilled employees.

“As the job market gets tighter and tattoos become more common, employers will feel more pressure to disregard tattoos in their hiring process," said Richard Kass, an attorney at Bond, Schoeneck & King in Manhattan who represents employers.

Businesses with policies that exclude inked applicants should rethink that approach, a workplace expert said.

“Given the tight labor market and the highly competitive market for top talent, employers need to think carefully about selection policies that may needlessly narrow the applicant pool,” said Janet Lenaghan, vice dean of the Zarb School of Business and professor of management and entrepreneurship at Hofstra University.

Millennials, more than any other demographic, have embraced tattoos, and that, in large part, is why the body art has become more accepted at work, experts said.

Nearly half of millennials, or 47 percent, have a tattoo, according to a 2015 Harris Poll, its latest survey on tattoos.

The highest percentages of tattooed people are in their 20s and 30s. Here are percentages in six age groups between 2003 and 2015.

That compares with 13 percent of baby boomers, the previous dominant group in the workplace. Overall the survey found that 29 percent of Americans of all ages  had a tattoo in 2015, up from 21 percent in 2011.

Can you see your doctor's tattoo?

The Harris Poll asked people if they were "extremely comfortable" dealing with professionals with visible tattoos. Here are the responses for 11 professions, starting with the overall population. Click on the arrows to see how it changes by age group.

“It’s not as taboo as it once was, “ said Steven Pena, 37, a project manager at Ivionics, an IT consulting company in Hauppauge. Pena has one arm completely tattooed, a pattern known as a sleeve, and hopes to fully tattoo the other. “It's kind of funny, 10 to 20 years ago tattoos were looked down upon. Now they're socially acceptable.”

His colleague, Julio Pedreira, 43, also a project manager, says he has multiple tattoos, including two that are visible on his forearms.

“I don’t feel self-conscious about it,” he said. “I know he [the company president] supports it.”

That means Paul Sperry, 54,  who heads the 32-year-old company. Until 10 years ago, Ivionics' policy required employees to have no visible tattoos in front of customers, he said.

Sperry said that at the time he thought tattoos “were too casual and didn’t carry the professionalism that we wanted to project as a company.”

But as society's views about tattoos changed, the company felt its policy was counter-productive, and it revised its requirement, allowing visible tattoos.

“There were some good quality [people] that we were excluding from our team,” Sperry said. “And the other side to it is that we felt that customers were more accepting of working with people that had visible with tattoos. The customers weren’t concerned about the actual look but more about the work product.”

Another local company that changed its policy is Bohlsen Restaurant Group, which is noted for such upscale restaurants as Prime in Huntington and H2O in East Islip.

Kurt Bohlsen, co-owner, said that 15 years ago tattoos were associated with sailors and bikers. “We sort of frowned upon them and said, ‘Listen you can have one, but you have to cover up.”

The company changed its policy to allow visible tattoos about 10 years ago.

“People come into our business to be social with their friends,” he said. “We decided that if we wanted to be a progressive business, we should allow [tattoos]," he said.

National companies are also lifting their bans on visible tattoos. In 2014 Starbucks removed a longtime ban requiring employees to cover their tattoos, after an employee gathered more than 25,000 signatures on an online petition to lift the rule.  Visible tattoos are now allowed, except on the face or throat, and they can’t contain hateful or lewd language, according to the company’s guidelines.

A University of Miami study released last summer found that wage and employment discrimination against tattooed workers has declined.

“More and more people are getting inked, and as a result attitudes are changing,” Michael French, co-author of the study and a professor of health economics at the University of Miami, said in an interview. ”With so many people being tattooed and entering managerial positions themselves, they are unlikely to discriminate against people who look like them.”

Some local employers still frown on visible tattoos. Corporate culture largely dictates how open companies are to the body art.

“We’re really just trying to uphold the farm-fresh image,” said Karin Vota, human-resource manager at the Farmingdale store “We want to make sure that look is upheld throughout the store, no matter what department you are in.”

In general, job applicants and temp workers, in particular, still need to be cautious about displaying their ink when they are unfamiliar with a company’s culture.

“Certain clients do not like to see candidates with tattoos,” Linda Langer, the Melville-based vice president of Access Staffing, said of some Long Island service-industry clients, “We will counsel them to make sure their tattoos are covered before they interview with those clients.”

Still, Kristen Russo, a human-resource specialist at Alcott HR, a Farmingdale human-resource services company with hundreds of clients, said she is seeing a more relaxed view of tattoos among companies, even in the service industry.

Fewer companies are "saying that just because [applicants] have a tattoo that doesn’t mean they aren’t going to uphold our values,” Russo said.

Some executives said they had never banned visible tattoos.

“I don’t think it was ever an issue for me,” David Pasternack, chief executive and co-founder of Didit, a marketing and communications firm founded in 1995  that in late November relocated its headquarters from Mineola to Melville. “We’ve always had creative people, and we have always had people with tattoos. It would never have dawned on us to have a policy.”

And clients don’t seem to mind, he said.

“We certainly have had clients come in that look like they came out of a Brooks Brothers Store who you think would be uptight, and certainly they don’t seem to have any problems,” Pasternack said.

“If someone comes in with tattoos on their forehead, that is a whole other issue, I suppose,” he said.

“We just expect our associates to use good judgment at all times when representing MSC with customers, suppliers, associates, etc,” said Paul Mason, spokesman for the distributor of industrial tools and supplies.

“Self-expression and creativity — that is what we thrive on,” she said. Tattoos are “body art as far as I am concerned.”

Companies walk a fine line in the tattoo debate. A policy restricting tattoos could land them in legal jeopardy.

For example, an employer could violate the law if its policies banning visible tattoos affect employees who wear tattoos for religious reasons.

“In New York and most other states, discrimination on the basis of personal appearance is legal, as long as it is not linked to race, sex, ethnicity, age, [religion] or some other protected category,” said Kass, the attorney.

However, if an employee’s tattoo is offensive to a protected class, then that could lead to violations and a restriction would be legal, Kass said.

“Then an employer would definitely have the right to direct the employee to cover it up,” Kass said.

In the meantime the popularity of tattoos is becoming ingrained.

“It’s a part of us, especially the younger people,” Bohlsen said. “There is no avoiding it. So we may as well embrace it.”